Do You Know How to Choose the Best Men's Suit Fabrics?

Men’s suits made from patterned or textured fabrics look extremely interesting. While most of these are considered less formal than solid-coloured suits, they do have a legitimate place in the well-dressed man’s clothing arsenal.

Once you’ve built up a respectable wardrobe of classic men’s suits, do indulge yourself by exploring alternative patterns and textures.

King among stripes – and the classic choice – is the pinstripe. Pinstriped suits (especially in navy blue) provide a traditional look and are almost the same as a uniform for businessmen, especially salesmen.

They comprise narrow, prominent stripes with colours ranging from white to gray where the suit colour is either dark gray or black. White or gray pinstripe suits never seem to go out of style, unlike suits having stripes in other colours such as pastels or the boldest stripe pattern, the chalkstripe. This is because suits with differently coloured stripes are perceived as informal.

Thin, close-set stripes, such as pinstripes, make the wearer appear taller because they draw the eye upward toward the face. They can also make a burly man appear thinner by drawing attention away from his midsection. While they do give the illusion of greater height, they are less formal than classically spaced pinstripes.

If you're a diehard pinstripe fan, a self-stripe is similar to a pinstripe, but the parallel stripe effect is achieved using a weaving technique rather than a different coloured fabric. Because of this, lines on self-stripe fabrics are usually subtler than pinstripes. A self-stripe pattern is versatile and good for most occasions. 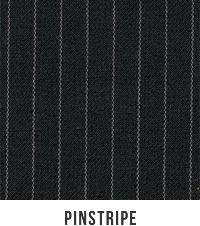 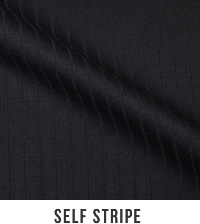 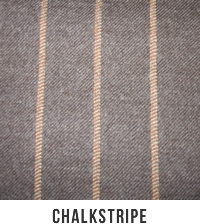 Plaid suits are the best known check suits. Synonymous with tartan suits, check patterns share a close association with Scottish clans. Plaid refers to a thick, tartan cloth used as a blanket and thrown over the shoulder when wearing a kilt.

Plaid suits, however, are not synonymous with checks; checks denote any fabric with intersecting horizontal and vertical stripes. Checks are always less formal than solids or stripes with the sole exception of Scottish tartans worn on formal occasions.

Glen Check and Prince of Wales check resemble a tartan. although they are usually monochromatic (or with a subtle window-pane overlaid). Utilising bands of horizontal and vertical stripes, these suits create a wider check effect in the fabric. Appropriate for most semi-formal occasions, suits made from this fabric are considered suitable for weekend or country wear.

In general, check patterns are equally as good for sports jackets as they are for a daring business suit. Depending on the boldness of the squares, these patterns could be considered either sophisticated or dashing. 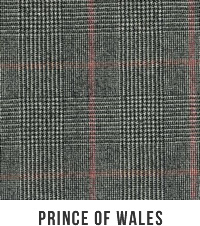 A herringbone pattern is a small, arrow-shaped pattern found in heavy, woven fabrics like tweed. Like the Glen Check, it is an appropriate pattern for most occasions; it is often used for winter and country suits as it usually adorns heavy fabrics. The houndstooth pattern resembles a saw-blade and is more commonly used for sports jackets rather than full suits. 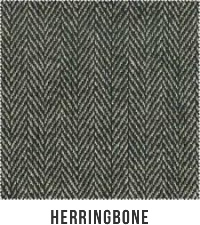 Bird's Eye and nail-head suits have tiny dots of a lighter colour on a darker background. A bird's eye suit usually appears as a solid somewhere in between the two colours – giving an effect similar to the one of an Oxford cloth shirt. Nail-head suits are appropriate on any occasion where stripes are acceptable. They can also be substituted for solids on all occasions except those that are extremely formal. 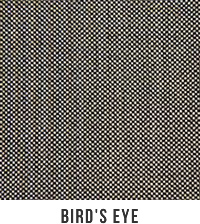 When it comes to picking the best patterns or textures for an alternative suit, you could feel overwhelmed by all the choices. Fortunately, we make it easy for you!

Montagio Custom Tailoring's expert staff will lead you through the process of picking your fabric, choosing your design and style options, taking your measurements, and fitting your final garment. All you have to do is put it on and wear it with pride!